Did your pupils meet their targets… or perhaps exceed them?  Or did some fail to achieve certain targets?  Were the targets sufficiently challenging, and how might this influence target setting next year?.

All of these are important questions, and they can all be answered with minimal effort by using carefully focused reports in CASPA, whether you are pin-pointing a certain pupil, or all pupils for a specific subject, class, etc.

What needs to be recorded in CASPA in order to make full use of this analysis?

To answer all of these questions, you only need three items of data, and it is most likely that you will have recorded these anyway as part of your normal use of CASPA:

This therefore assumes that you are reporting either at the end of the current academic year, or for a previous academic year.  So given that you have this data recorded, you’re ready – CASPA will do the rest!

Analysing target vs actual for an individual pupil

You may be doing this for one pupil, or for, say, a class of pupils, but, crucially, you want analysis for all subjects for a pupil on one page.  Let’s start with a single pupil.

All of the detail for one pupil

Go to Data | CASPA assessment data, select the pupil you want to investigate from the list of pupils, select the ‘Graphs and reports’ button at the top of the page, and the ‘Target vs actual’ tab (see below). 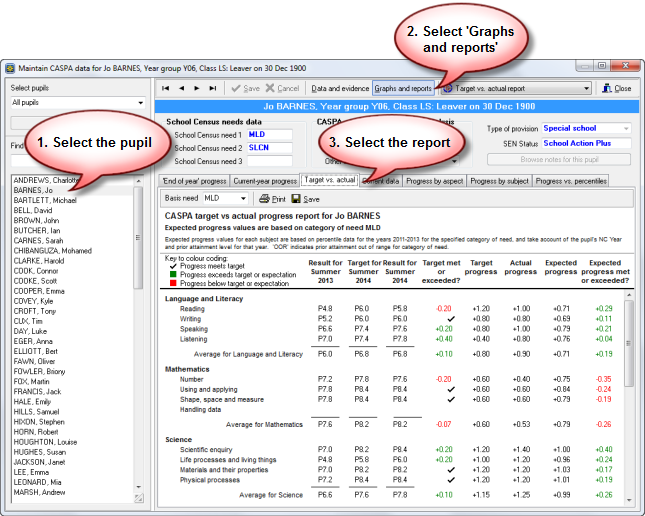 Immediately, you have the report for all subjects (scroll down for Foundation subjects).  Now let’s see what it can tell us… and we’ll start with the row for the subject Reading.

The fourth column provides the first analysis: did this pupil meet her targets or not.  To speed up your analysis, the colour-coding allows you to scan the column to pick out the red values (she failed to achieve the target), the green values (she exceeded the target) and the ‘ticks’ (she met the target exactly).

For Reading, she failed to meet her target so this would tend to ask a second question; why?  And this is a question that the last four columns can help to answer:

The final column provides the second analysis: how does her actual progress compare with the CASPA benchmark for the selected need?  In this example, she made significantly more progress than expected.  So if she failed to meet her target but significantly exceeded CASPA’s expectations, it would make sense to take a look at whether the target was over-challenging.

Alternatively, it might seem reasonable to just accept that, in the fourth column, a ‘tick’ or a green value can be passed over as at least ‘acceptable’, but this might not always be the case.  Take ‘Using and applying’ as an example.  She met the target exactly, but when we take a look at the final column, we can see that she failed to meet CASPA’s expected progress.  So what was going on?  The target set was lower than CASPA’s expected level which looks, on the face of it, like an under-challenging target.  Perhaps the teacher had a good reason to set such a low target, but it warrants some investigation.

In summary, the fourth and final columns are colour-coded to give you the key analysis quickly, whilst the other columns provide the data on which this analysis is based – all in one report for the pupil. 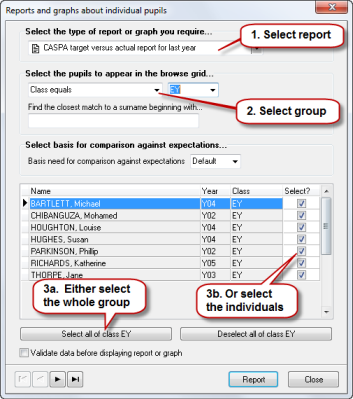 All of the detail for a number of pupils

If you’re a class teacher, you might want to simply print out this report for all of the pupils in your class to work through.  You can do this from a different menu option; go to Report | Reports and graphs about individual pupils, and from the first dropdown, select ‘CASPA target vs actual report…’

In the next dropdown you can select a group of pupils, perhaps ‘Class equals’ and then select your class in the dropdown that then appears to the right.  This will display all of the pupils in your class below.  Either click the button ‘Select all of pupils in class <class name>’ or check just the boxes of the pupils you want from your class.

Now we have the same report we looked at above, but this time, you have next page and previous page buttons to skip from one pupil to the next.  Click on a print button to print each page either to your default printer or to select a printer, pages, etc.

Detailed analysis for a group of pupils

Now we move away from every piece of detail and I will use a scenario to illustrate how this report might be used.  Let’s assume I am a subject leader and I want to see whether pupils met their targets in Maths.  I would want a single report with all of the pupils I’m interested in and would only want the Maths data.

In CASPA, what can be done for individual pupils can often be done for groups of pupils, albeit with necessarily a little less of the detail.  So here’s how I would do this…

Go to Reports | Reports and graphs about groups of pupils, which displays a report selector page.  Now to make my selections:

I think that will do for my selections even though there are more options!  Click the ‘Report’ button to display the report based on all of the selections made.

CASPA now displays my report.  Firstly, the header summarises my selections so I don’t have to remember or guess who and what I selected.

I can also navigate to the next/previous page to see the other groups, in this case those entitled to free school meals.

So this version of the target vs actuals analysis provides the same first four columns for each subject that we saw in the report for individual pupils, but I can scan a whole group of pupils in one report using this approach.  Of course, if I saw something odd for a particular pupil, I could always go back to the individual pupil report to gain the full details.

It is probably reasonable to say that we would all like to improve each year – but how?  When it comes to target setting, one valuable resource at our disposal is past data, and CASPA can help here too.  In the past, the idea of wading through paper folders to see how targets were set and their success would be too daunting for most.

However, the same analysis we have just been exploring can give us valuable intelligence to help us with future target setting.  After all, if a pupil exceeded all of his/her targets, or all pupils in a subject exceeded targets consistently, one conclusion might be that the targets were insufficiently challenging

Equally, if all targets generally demanded less progress than CASPA expects, the targets would not even be regarded as satisfactory in the eyes of Inspectors (unless you can adequately justify why this is not the case).

So, whether analysing target progress for individuals or for groups, for no additional effort, you also gain a valuable resource to review target setting strategies.

What about pupils who are no longer at your school?

When you come back in the autumn term and roll CASPA forward, pupils who left in the summer term will no longer be visible.  So how do you once again obtain your analysis for them?

Pupils whose data was recorded in CASPA but who left in a previous year will not be visible in the current version.  The ‘2014’ in CASPA 2014 refers to the summer term of the academic year that the data and analysis revolves around; the pupils whose achievement is normally analysed during the 2013-2014 academic year will be the puils who are on roll in that year.  All other data is not displayed, but it isn’t deleted. 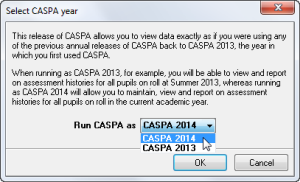